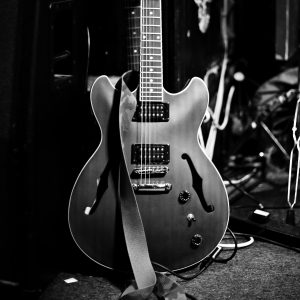 This website is focused on the SOLO activities of British singer-songwriter, guitarist, recording artist, producer (& now YouTuber) SAM JONES. It also covers some of his projects outside of his solo work & some of the bands he’s most associated with both past & present.

In 2017-18 he fronted Mod-Punk band Angry Town in Poland. The name of the band refers to Gniewkowo, where the original line-up met for the first time during a solo concert of Jones. He has continued to use this name to refer to appearances with his hallmark power-trio.

He was born in Chester, England & grew up in North Wales. After spending 12 years living in London until 2016 forming a new Brighton-based version of The Artists Rifles (who were produced by Brian James of The Damned), playing guitar in Monkish, various versions of his solo band then forming The Berlin Lights recording project.

He moved top Poland, living there for 3 years, he recently returned to Wales. With an old school equipment set up, including a well-worn Yamaha RGX 121D customised electric guitar he’s owned since the age of fifteen & a small Vox amplifier he’s travelled the length & breathes of Western/Central Europe playing some pretty impressionable shows along the way. He is known for his slide guitar playing & crooner vocal style. His gypsy-like travelling reputation landing him the name ‘Britain’s Young Seasick Steve’. His live set runs through his original works ‘Hit The Floor’, ‘Fire In The Rain’, ‘The Walker’, ‘Women Gone’, ‘Under Glass’, ‘Looking Back’, ‘Hell’s Bank Note’, ‘When The Howling Wind Comes Back’, ‘The Way She is’, ‘If I Were A Rich Man’, ‘Runaway Wild’, ‘Million Dollar Baby’, ‘Somebody’s Somebody’, ‘Boredom Drug’, ‘On My Way’, ‘I’m Down When She’s Down’, ‘Nightgirl’, & ‘Famous Last Words’ now staples in his set with covers of songs by the classic bands from the Garage & Punk genres like The Jam, The Damned & Billy Idol who have influenced him. 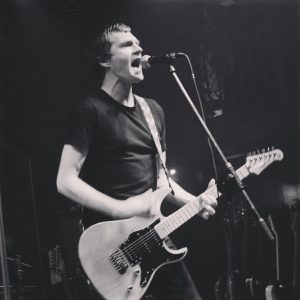 Achieving three self-booked, self-financed & self-promoted European tours since April 2016 with multiple mini-tours of France, Belgium & Poland. He’s even toured the Isle Of Man. His debut foreign show was in Poland at Cafe Mięsna in Poznań in 2007. He set up his own booking agency/record label Camouflage Booking / Camouflage Records & sells limited edition CDs online or after shows. A series of ‘bootleg-style’ limited edition CD live albums have been produced each with additional demo/studio bonus tracks. He’s already gained the respect of many other well-respected industry insiders like journalist John Robb when Angry Town performed their cover of The Damned’s ‘New Rose’ when they supported his band The Membranes in Poland. He has kept a close relationship with several established musicians such as Charlie Harper with whom he has recorded a cover of the Hank Williams classic ‘Move It On Over’ in 2007 as a member of ‘Charlie & The Truckers’ & featuring him on one of his own tracks ‘Hit The Floor’ in 2011 as ‘The Berlin Lights’ which wasa later released as a 7″ vinyl on Time & Matter Rcordings. He also performed an acoustic set at Charlie’s 65th birthday bash at the 12 Bar Club on London’s Demark Street in 2009.

Ged Lynn of The Stairs has acted as Angry Town’s forth member & the two played as a duo at The Hatch Bar in Liverpool wrapping up a Sam Jones European tour in 2017. He even appeared on a track with Charlie Heaton (Jonathan Byers in Stranger Things). 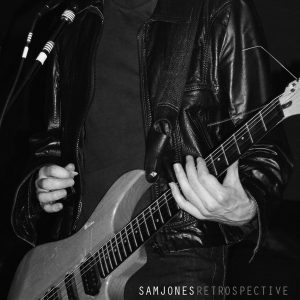 An ever expanding album entitled ‘Retrospective’ is on it’s 2nd edition. Compiled from studio & live recordings it now spans 2002-2017 & features tracks originally recorded under the names Sam Jones, Angry Town, The Berlin Lights & The Artists Rifles. Each limited edition CD/USB Flash Drive edition features exclusive bonus tracks not available on the download album. The track listing of the album itself is gradually increasing with each issue with the intention of a double album in the future as his back catalogue is further explored. The album acts as a introduction to his songwriting with some notable contributors including Charlie Harper of UK Subs, Brian James of The Damned, PJ of Anti-Nowhere League, Malcolm Joseph of Grace Jones band, Robbie Kelman of The Dripping Lips, Richard Marcangelo of Manfred Mann’s Earth Band, Danny Ward of Gengahr & Tony Piper of Vice Squad. Comprehensive track by track details act as an online inlay card & are frequently updated on the album notes section of this website. 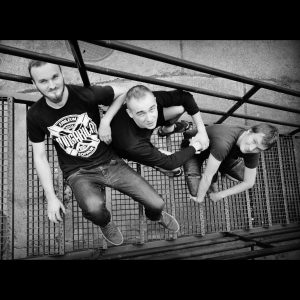 His exciting performances are delivered with an energy packed one-inch punch playing 2x45 minute sets. Bringing together the skills he has crafted busking on the streets & fronting his pen-named bands & studio projects. Café gigs at Wiel’s Renard Noir in Brussels were integral in his story leading onto full European tours. Shows at L’Oasis 244 in Paris, Hard Rock Pub Pamela in Torun, Artliners in Berlin, Mustang Live Music Club in Poznan, Blues Sklep in Prague & Hard Rock Cafe in Antwerp have put him firmly on the European map! An appearance on WWk’s Our Favorate Shop Sessions for Made In Liverpool TV & interviews/live sessions on Radio R in Czech Republic, Radio Benelux in Belgium & Radio Sfera UMK in Poland (http://www.sfera.umk.pl/…/blues-rock-z-wielkiej-brytanii-r…/) are favourable milestones in his career.

As well as his music his unique mod/alternative hybrid sense of style caught the eye of fashion label Relco London in 2017 who have used him to model their clothes ever since & he can often be seen wearing their gear on stage & in photos. He is featured heavily on their website. Recent shows at Antwerp’s & Dublin’s Hard Rock Cafes have put him firmly on the European map once again & his ties with Poland remain as he embarks on a new recording project with original members of ‘Republika’. He has been featured in films such as ‘Sweeney Todd’ (directed by Tim Burton) & ‘Sex & Drugs & Rock & Roll’ (Ian Dury biopic).

His set list includes some new songs such as ‘Burning Star’ which demonstrate a slightly different direction than he is known for.