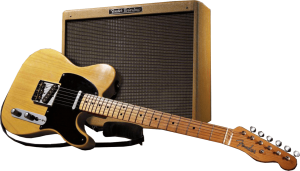 Due to the Coronavirus lockdown I’ve been forced to cancel all my England / Wales shows booked for April & Poland shows booked for May. After registering my SAM JONES solo performances as an official business in March this whole thing has been very bad timing! The future is uncertain so please spread the word about my new online lessons! From Monday 6th April I’m offering ONLINE guitar & bass lessons, music for Autism & English conversation. This service will be entirely FREE to everyone for 2 weeks (until Monday 20th April) while I get to grips with the technical aspects & a return to teaching. I am limiting each person to 3 of these FREE lessons. I know there will be people who will want to pay me for this to whom I simply say, you will be helping me find my feet. If you still feel the need to give me something back then a nice testimonial would be gladly accepted after the 2 weeks but I’m really not doing it for that! When you book a slot it is already set to £0.

From Monday 20th April my online lessons will cost as follows: guitar & bass lessons / music for Autism £25 per hour & English conversation £10 per hour. Additional pupils for any of these subjects pay £10 per hour. Please use the booking system below which is set up for specific teaching times which are Monday-Saturday starting at 9am & finishing at 9pm. I take a lunch break from 1pm until 2pm & a dinner break from 5pm until 6pm there for I do not teach during these 2 hours. Please select a contact option in which you want to use to make video contact, then click on the direct link to take you there a couple of minutes before our sessions starts.

Once a week I have an internet, phone & computer free day so I will not be teaching on Sundays. 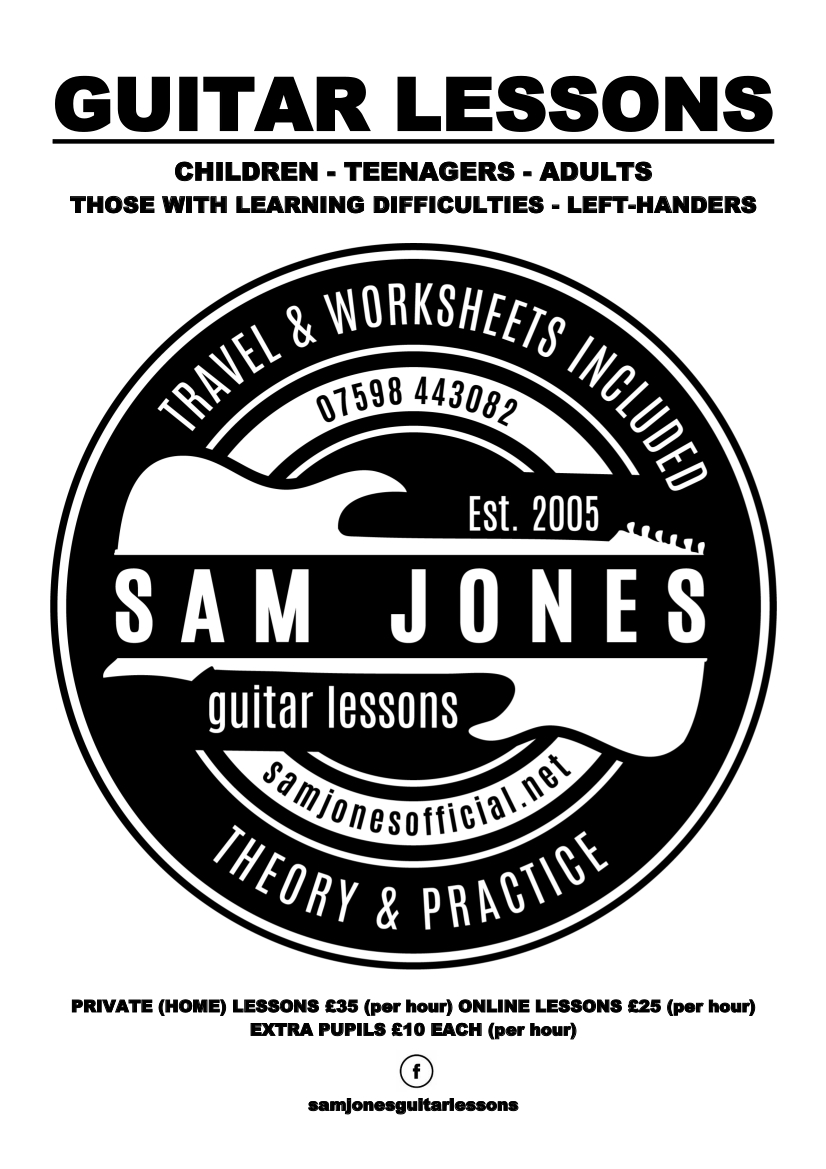 Sam has an extensive music knowledge and a genuine passion for music that he brings into every lesson. Friendly and supportive, he takes time to tailor each 1-2-1 lesson to your specific needs and interest allowing you to develop at your own pace. His comfortable style of teaching makes learning effortless.

Sam Jones guitar teaching has been a very positive influence in my sons life and he has enabled him to concentrate and focus on learning an instrument and even supported him in singing and performing. This is particularly impressive considering my son has severe Autism and PDA (Pathological Demand Avoidance) as well as severe speech, language and sleep disorders. Sam is very calm and very patient and initially worked with every one of my sons tutors alongside my son. However now my son prefers to work with Sam alone and has continued to progress, is very happy to see Sam and looks forward to his sessions with him. This is an unusual outcome in my experience and I am very pleased with the efforts Sam has made. Sam is also always punctual and very professional at all times, his passion for music and the guitar is very infectious and this shows clearly in my sons continued interest. Sam has always taken my son seriously and treated him as any other student which is very refreshing. Sam has become a very positive role model for my son as well as a competent music teacher. Highly recommended. 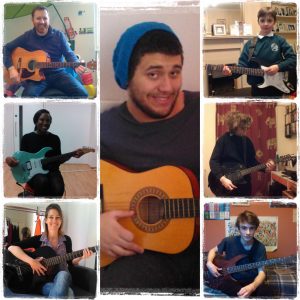 Whilst living in London for 12 years I ran a highly successful private beginner guitar lessons, working with pupils of all ages who typically took weekly lessons at their homes, my pupils included several celebrities such as Andy Bell of Erasure & journalist David Henshaw. I even prepared actor Joseph Mydell for his appearance as Jimi Hendrix at Handel & Hendrix in London (previously Handel House Museum) which was directed by Maureen Lipman.

I have met many weird & wonderful people through teaching & during my first year one of my lessons was ‘pranked’ & filmed by hidden camera for the Christian O’Connell Show. As well as giving me a tremendous sense of pride, this job has taught me basic business skills I can now use anywhere. 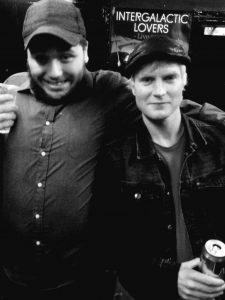 I became especially popular among parents of students with learning difficulties. I also ran an After School Guitar Class at a Primary School, Islington. One of my pupils gained a grade A in his GCSE music exam playing bass. I think the popularity of my lessons was due to my reliability, especially my timekeeping. My main two selling points are that my lessons are split into basic music theory (or a guitar technique) & practice, performance & transposing recorded music to paper makes up the practical element of my lessons. My slogan has been “Learn guitar, bass & music theory without buying any books”. I have also taugtht grade pieces for those wishing to prepare for an exam using the London School of Music (RGT) Acoustic Guitar Playing series. 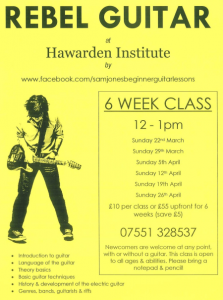 I’ve written 2 guitar eBooks entitled ‘So You Wanna Play Guitar’ & ‘Mali Guitar’ the latter specialising in pupils with autism. During breaks in a European solo tour in July 2007 I began taking frequent trips to London to continue working with several autistic ex-pupils as a support worker through music therefore developing my Music For Autism. In addition to my private lessons in April 2013 I ran the first of a trial lecture-style guitar class entitled Rebel Guitar London at two hired locations in London. Between October 2014 & March 2015 I ran two Rebel Guitar courses at an Institute in North Wales. In August 2015 after many frequent trips I began offering beginner guitar lessons in Brussels when I am visiting.

From late 2016 until late 2019 I lived in Poland where I created & taught British Studies as well as running English classes at a prestigious academy in Toruń where I also gave private English conversation to locals. I have talked at workshops in Poland with Michael Jackson guitar legend Jenifer Batten & have spoken in several schools as a guest or foreign public figure. 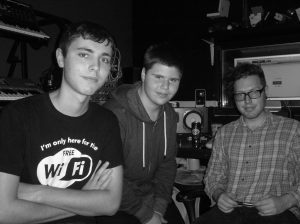 I have always designed my own leaflets to promote my lessons & run a Facebook page to assist my pupils with practicing & networking with each other. Some pupils have gone on to play together then record in the studio with my assistance, in particular Avoid The Sunlight who released a song on YouTube called Lost In Eternity in 2013. In 2015 I stood in on drums during rehearsals with Argyria, a band I help one of my pupil’s put together by auditioning members. In 2016 I began teaching drums.

Sam has been giving guitar lessons to our son Jay (now aged 20) for 8 years. We are completely relaxed with Sam, who is not only a patient and understanding person, but reliable and courteous at all times. Sam has even continued to teach Jay during his frequent visits whilst living out of London. His support helped to gain Jay’s place on a HND in Music Production course, giving Jay a life vocation. He’s been a good influence on Jay, often giving him advice he would rather hear from him than us! Sam has become a close friend of the family and often helps out with other things like taking Jay to recording studios, releasing material online and applying for jobs. He’s introduced Jay to many new styles of music & even attended concerts with him. We highly recommend Sam as a guitar teacher. He has given Jay the confidence to write his own songs in a new band. For us these lessons have been well worth the money, when we consider all the benefits. A teacher knowledgeable on his subject, always on time.

Sam is a great teacher, really committed to ensuring my kids enjoy as well as learn (boys on bass and lead guitar) – a reliable teacher too.

My son Ben did private lessons with Sam for over a year before relocating abroad, Sam’s dynamic, non-judgmental approach to teaching makes him a one of a kind guitar teacher, he is always well prepared and his vast knowledge makes each lesson unique. My son loved that he was open to play a range of music from “Pulp Fiction” to ‘The Shadows’, his lessons were fun, interesting and most importantly Ben developed a natural interest in bettering himself. A year later his passion is going strong and we are still in contact with Sam. Just recently Ben auditioned to get into a special music stream for High School and played a piece he was taught by Sam – we highly recommend Sam as he just ‘gets it’!

I really enjoy my guitar lessons with Sam. He has introduced me to some great songs and he explains it all very clearly. Sam is always on time and makes the lessons fun. 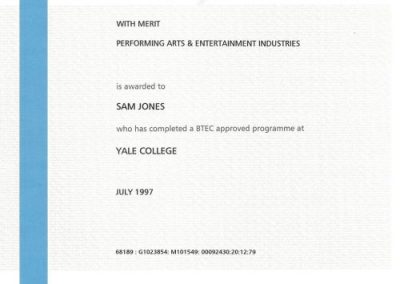 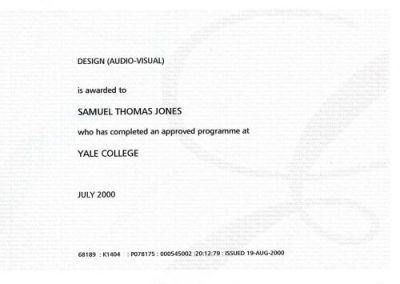